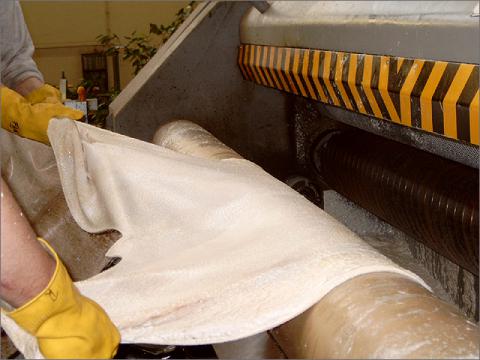 Typically only a small part of fleshings is used for manufacture of glue and animal protein while the major part is dumped as waste at landfill or disposed of along with other solid wastes. The unutilised fleshings, containing high concentration of lime and sulfide, putrefy and produce obnoxious odour. They also cause groundwater pollution, attract flies, rodents and stray dogs and thus represent a public nuisance. Due to high moisture content handling and transportation of fleshings is quite difficult. On the other hand, one tonne of wet fleshing with 85% moisture is estimated to generate 20-30 m3 of biogas. To solve the disposal problem of fleshings, one of the options considered and tested during UNIDO Regional Programme in South-East Asia was biomethanation. The results of testing at the pilot plant, the first of its kind in the region, are given in this report.