Despite all preventive measures, a sizeable portion of pollutants can only be removed by the end-of-pipe methods, i.e. treating effluents discharged in the course of leather processing. One of the most successful areas of interventions implemented or facilitated by UNIDO was designing and managing the construction of cost effective [Common] Effluent Treatment Plants ([C]ETP). More than 250 such plants have been designed, established or upgraded through various technical assistance projects. Achievements and experiences were documented in technical papers, reports and manuals which are available in this section. A special Animated Visual Training Tool was also developed by UNIDO and is available in the section “e-Learning".

In the meantime a lot of practical experience has been gathered, some new tanning technologies developed and implemented and some new challenges have also emerged.  Since proper training is essential precondition for modern, sustainable leather processing, it is felt that a single, comprehensive paper on cleaner leather technologies, rounding up and updating earlier papers, could be of great help in training and capacity building activities.

The study also includes many tables, charts and (equipment) photos accompanying and illustrating the text.

It is envisaged that the document will serve as a basis for developing globally accessible eLearning courses on sustainable leather manufacture. 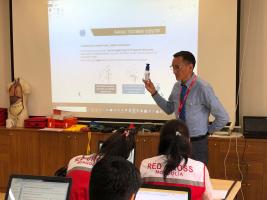 https://learning.unido.org/course/view.php?id=40  (copy and paste this link into browser)

A safe return to work during the COVID-19 pandemic Reommendations 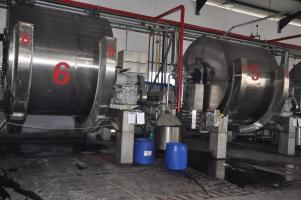 Recommendations and preventive measures in response to COVID-19: Guidance for the industrial sector

This tool provides guidance to employers, workers and their representatives on preventive measures for a safe return to work in the context of COVID-19, conforming to well established principles and methods on occupational safety and health risk management.

There are many other useful guidelines and recommendations available.

Assessment of performance of ZLD operations and Analysis of flow and energy aspects of Zero Liquid Discharge (ZLD) technology in treatment of tannery effluents in Tamil Nadu, India 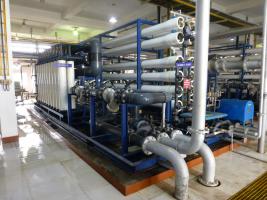 The precarious situation with water and soil pollution in the area of tannery clusters along the Palar River prompted the state environmental authorities to press for adherence to TDS discharge limits as well as to impose an approach not practiced in the tanning industry: a Zero Liquid Discharge (ZLD) concept.

Essentially, the ZLD systems concentrate dissolved solids by Reverse Osmosis (RO) and some kind of Multi Effect Evaporation (MEE) until only damp solid waste remains. Solid waste is disposed and nearly all water is reclaimed and reused. Accordingly, some of the existing Common Effluent Treatment Plants (CETPs) have been supplemented by RO and MEE, together with auxiliary steps (tertiary treatment, water softening etc.).

The analysis investigates and relates raw and equalized effluent inflows, RO feed, permeate and reject, evaporator feed and condensate and the yield of recovered, reusable water. Since the energy costs are critical for the viability of the entire concept, data about energy consumption (thermal, electrical main and Diesel) at key stages (RO, multistage evaporation) are consolidated, analysed and correlated. Additional energy needs and costs are compared with those for conventional (CETP) treatment and estimates made of the carbon footprint increase caused by the ZLD operations.

How to deal with hydrogen sulphide gas (in tanneries and ETPs)

Hydrogen supplied gas present in tanneries and effluent treatment plants (ETPs) has proven fatal to workers exposed to it many times.

It is therefore necessary that the owners and managers of tanneries and effluent treatment plants are fully aware of the dangers posed by this poisonous gas and take all preventive and precautionary measures to protect the workforce from exposure to this gas. In the event of accidental exposure of a worker, they should know how to deal with the situation.

UNIDO’s activities in the leather processing has as one of its important objectives, improvement of occupational safety and health practices in tanneries and effluent treatment plants. Under this objective, the project has been seeking to demonstrate in selected tanneries improvement practices for better occupational health and safety of the workers.

It is hoped that the industry representatives and other concerned with the occupational health and safety of workers in tanneries and effluent treatment plants will find this publication useful.

How to deal with hydrogen sulphide gas (Bangla version)

How to deal with hydrogen sulphide gas -(HINDI version)

UNIDO on-line course - How to deal with hydrogen sulphide gas 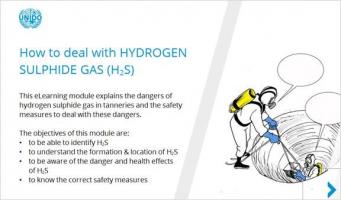 Confronted with increasing legal and social pressures, no tanner can afford the luxury of not being familiar with the main issues and principles of occupational, safety and health protection pertaining to tannery operations.

Hydrogen sulphide gas present in tanneries and effluent treatment plants has proven fatal to workers exposed to it many times.

It is therefore necessary that the owners and managers of tanneries and effluent treatment plants are fully aware of the dangers posed by this poisonous gas and take all preventive and precautionary measures to protect the workforce from exposure to this gas. In the event of accidental exposure of a worker, they should know how to deal with the situation.

The lessons that follow are to help tanners, tannery managers and operators to acquaint themselves with the basic principles How to deal with hydrogen sulphide gas.

The on-line course developed by UNIDO including test provides an opportunity for the proper training within tanneries related to danger associated with hydrogen sulphide gas. After finishing the test with minimum score 80%, participants will receive the certificate and will be able to download it.

How to enrol into the UNIDO on-line course “ How to deal with hydrogen sulphide gas”?

Follow a link: https://learning.unido.org/course/view.php?id=42  (copy and paste into your browser)

It is hoped that the certificate will be accepted also by Occupational Safety and Health Authorities as a proof that staff was properly trained.

Introduction to Treatment of Tannery Effluents 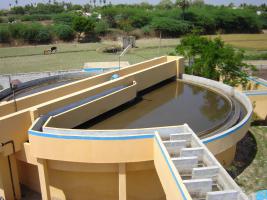 In view of ever increasing legal and social pressures, no tanner can afford to be unfamiliar with the main issues and principles of environmental protection pertaining to tannery operations. Among these, preventing pollution and promoting cleaner leather processing, which ultimately leads to lower treatment costs, clearly remain a priority. Through the application of industrially proven low-waste advanced methods - such as using salt-free preserved raw hides and skins, hair-save liming, low-ammonia or ammonia-free deliming and bating, advanced chrome management system, etcetera - it is possible to decrease the pollution load expressed as COD and BOD5 by more than 30%, sulphides by about 60 to 70 %, ammonia nitrogen by 80%, total (Kjeldahl) nitrogen by 50%, chlorides by 70%, sulphates by 65 % and chromium by 90%. Yet, despite all preventive measures, there is still a considerable amount of pollution load to be dealt with by the end-of-pipe methods. The purpose of this booklet is to help a tanner or a tannery manager (possibly a well-trained leather technologist) to get familiarized with basic principles and methods of treatment of tannery effluents. This knowledge should make him better equipped for communications with the factory’s environmental unit, environmental authorities and NGOs. To keep the manual short and concise, there are many simplifications and omissions of details; for in-depth understanding of the complexities of treatment of effluents and solid wastes (sludge) we recommend you to consult extensive literature on this subject. Finally, and contrary to the widespread misperception that vegetable tanning is environmentally harmless (in reality its effluents have very high, difficult-to-treat COD), the manual basically refers to the combined chrome tanning (i.e. chrome tanning supplemented by vegetable and synthetic tanning agents) because it is by far the most prevailing leather tanning method. 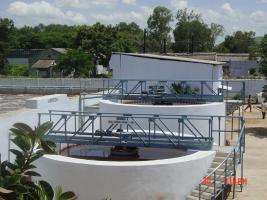 In Chennai and Tamil Nadu/India, which was the basis for demonstration of UNIDO regional projects, circumstances at the time of project (mid 90's) commencement were such that the tanning Industry was under considerable pressure vis-à-vis effluent treatment. As a result several tanneries or clusters had already undertaken investments in primary or secondary effluent treatment. Rather than create a possible redundant model plant, the project strategy was oriented towards demonstration of four full scale model effluent treatment plants representing different aspects of tannery effluent treatment plant in terms of influent, treatment process and size. Thus, the Ranitec CETP with treatment capacity of 4,000 m3/d receiving effluent from 76 tanneries processing from raw to finished and using amongst others an anaerobic treatment system (lagoon) was upgraded to serve as a model for similar treatment plants in the region. The Vishtec CETP with a capacity of 3,400 m3/d of effluent using two stage aerobic treatment system was upgraded (mainly process control) to be a second model site. The President Kid Leather Company ETP, 120 m3/d receiving effluent from semi-finished to finished tanning processes from an isolated was upgraded as a model site (automatic dosing, laboratory). The MHT Company ETP, capacity 100 m3/d, receiving effluent from a traditional isolated vegetable tannery, a low cost anaerobic treatment system, was upgraded and serves as a model for similar units. 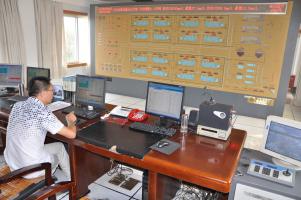 Benchmarking in the Tanning Industry 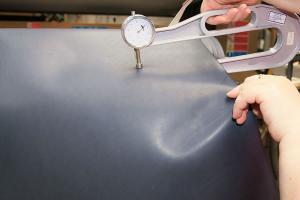 This paper attempts to discuss the main, predominantly technical, issues with regard to benchmarking; it is intended to assist those who are willing to admit to the fact that despite all explanations and definitions available, they are not quite sure what it is all about and whether and how it could be applied in the tanning industry. The paper outlines "cock-pit" check lists for ten areas - components: 1. Tannery location, infrastructure 2. Production parameters 3. Cleaner technologies 4. Energy management and consumption 5. Quality assurance, reprocessing, delivery time, failures 6. Product development, strategies 7. Occupational safety and health at work, maintenance 8. Effluent treatment, solid waste, air emissions 9. Financial indicators 10. Human resources and staff welfare, CSR. Some typical production parameters are also provided.

Benchmarking in the Tanning Industry