UNIDO in partnership withMinistry of Food, Agriculture and Light Industry (MoFALI) and UNFAO  is implementing an EU funded “Support to Employment Creation in Mongolia (SECiMC2)”  . One of the hands-on interventions of the project was to introduce a flaying method for hides and skins with the objective to eliminate, or at least to reduce, damage of hides and skins during flaying operations in the slaughter process. In order to reach this goal UNIDO has decided to introduce the Static Flaying Frame (SFF)[1]. The SFF is a simple mechanical tool that (when used properly) assists slaughterhouse operators to remove hides and skins from carcasses with little or no flay damage, resulting in a better quality, and more valuable, hides and skins for the tanning industry.

Mr. Altansukh Tumee, director of Altain Uulsiin Orgil herders cooperative constructed two types of SFF models for cattle and small ruminants together with UNIDO’s international expert Mr. Ralph Arbeid. They installed the two models at Baruun Mongol International and Khan Jargalant abattoirs in Khovd province and tested the flaying of hides and skins. The flaying time was 15-20 seconds per animal and there was no cuts and damages on the hides and skins occurred. It resulted saving labour, increasing productivity, improving hygiene to treat the meat, avoiding skin damages, and creating new job opportunity in the countryside. Furthermore, MoFALI reflected this as a standard requirement into the National Leather Incentive Scheme, which is being newly developed.

In the meat production industry, modern mechanically equipped slaughterhouses use advanced technical means to remove hides from bovine carcasses; and skins from sheep and goats. Sophisticated stainless-steel flaying machines and pneumatic flaying knives come at a rather high cost which can rarely be born in developing or emerging countries. In order to produce the same quality hides and skins, as achieved with a commercial flaying machine, smaller slaughterhouses can introduce the SFF which has the same function, but at a far lower price. In contrast with the flaying machine, the SFF can be constructed locally, at an affordable, price by artisans.

The SFF is a simple metal frame with pipes that turn on roller bearings. The flayed hindlegs of the hides (or skins) are clamped with a chain. The chain is then pulled through the frame – bolted to the floor – by means of a pulley; whether operated electrically of manually. The system exploits the weakness of the connection (being the fat layer) between the hide (or skin) and the carcass (meat) of an animal. By means of the force exercised by the pulley, the hide (or skin) is pulled off the meat, resulting (when properly used) in a product without flay cuts.

Mongolian livestock resources amount to 4.3 million cattle, 3.9 million horse, 30.0 million sheep, 27.0 million goats and 450,000 camels. Annually over 10 million hides and skins are prepared and 70% are sourced to tanneries in Mongolia for processing. 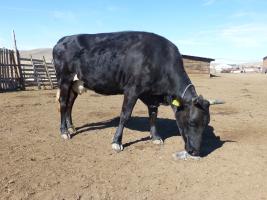 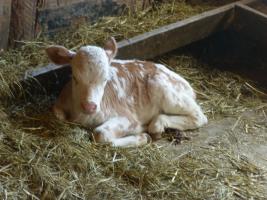 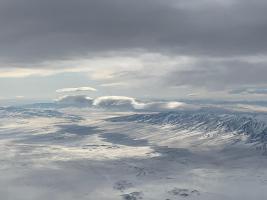 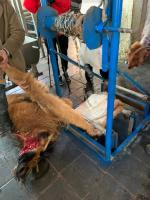 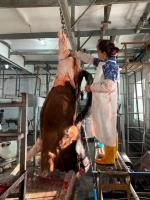 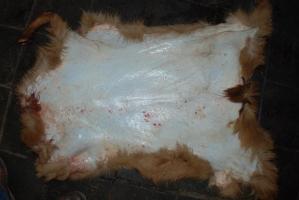 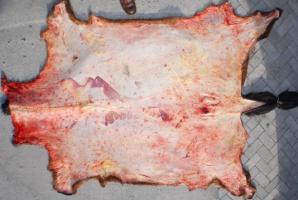 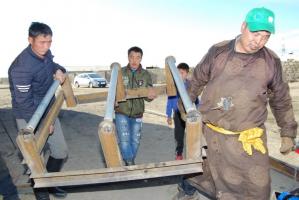 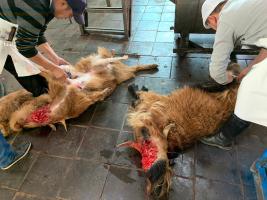 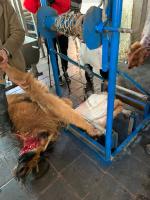 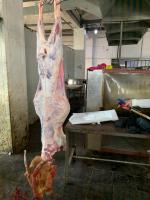 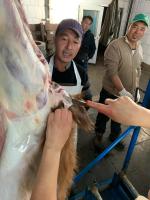 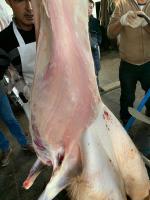 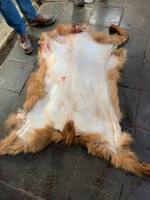 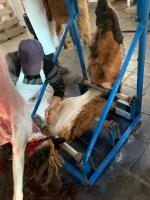